Along the path to war, déja vu anybody? 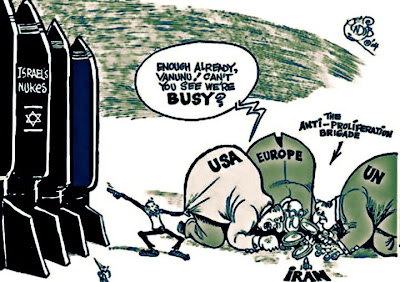 The recent sanctions enforced by the EU and the US have been useless to put any sort of pressure on the Iranian regime, having more effect  on the Iranian population themselves. While some countries have continued to trade with Iran, Israel has continued along their lines of threatening rhetoric. However, Obama has warned that sanctions remain on the table, and will become much tougher in the coming months, before any military action will be taken. Yet, the path ahead still remains highly dangerous with threats rising behind the scenes.


What seems to be ignored throughout the media is that top US military and intelligence officials, confirm that Iran does not have a nuclear weapon, and is not building a nuclear weapon. The National Intelligence Estimates from 2011 had no new evidence of any nuclear weapons program in operation. Thus, if Western powers were to attack Iran, this would be a violation of the Nuclear Non-Proliferation Treaty. Those who have warned of a 'new cold war' in the Middle East if Iran were to create a nuclear weapon risk vastly overestimating and exaggerating the position of Iran. More so, Israel's continued threats and provocative actions are nothing new and reminiscent of reports almost a decade ago, when they again, called for military strikes and action against Iran.

Today, we simply see the case of dramatised news reports and fiery rhetoric that are a way to justify any steps taken in the future. If we look at the bigger picture, the US is becoming weaker in its positions of influence in the Middle East with the current Arab Springs and new powers taking over previous 'puppet' regimes. Are these actions a way to maintain power in the region? Well, amongst many examples, a) the sanctions which are currently being imposed increase US leverage over oil markets, and b) the 'threat' which is posed by Iran condones more naval forces being deployed in the region. Along the same lines, as Israel become more and more isolated in the region, Obama is under increasing pressure to support an Israeli position. At this time, the Israel factor is highly detrimental within the decision making process.

Whether Iran are on the path to weapons or not, negotiations are the only way to settle the situation peacefully. In order for these to be successful, the international community must also deal with the threat that is evident from Israel. If Iran are to be disarmed of any nuclear capability, steps should be taken to balance powers in order to guarantee a nuclear free zone in the Middle East.

Obama's decisions remain fundamental in the upcoming weeks. How far is he willing to follow the military path? Surely he doesn't want to make the same mistakes as his predecessor.